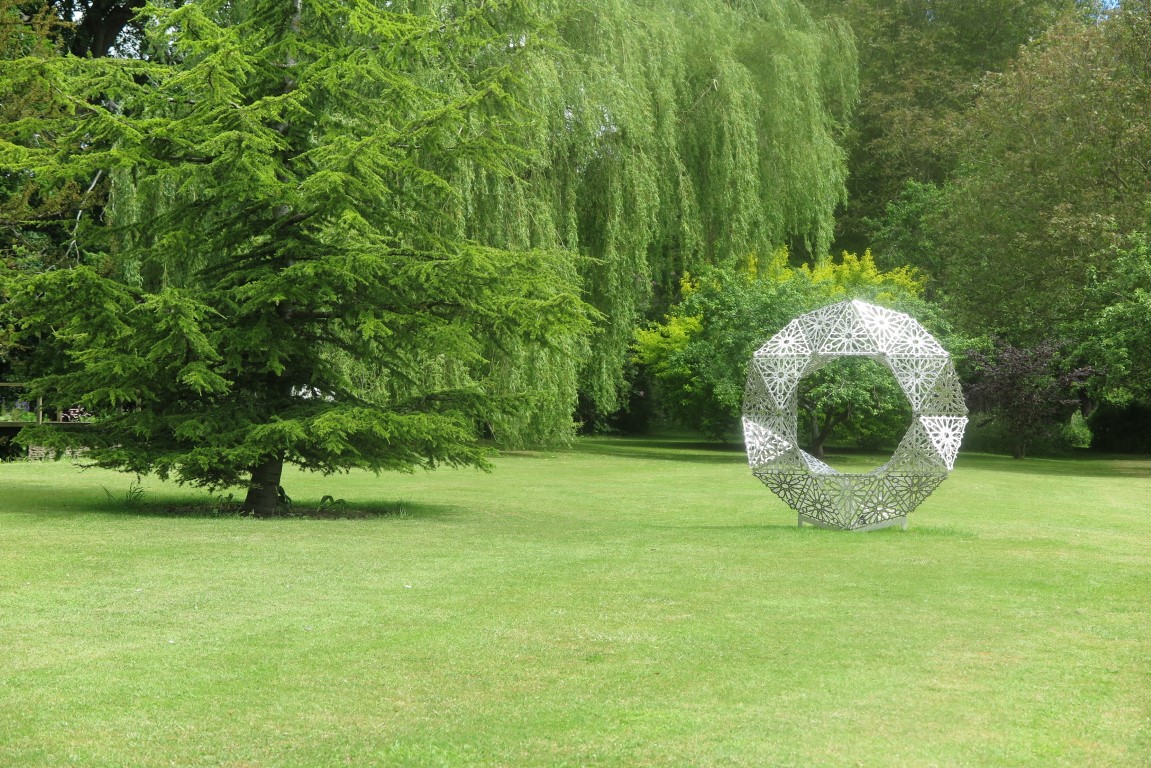 ‘Pete Moorhouse is one of the leading international artists that is creating innovative work reinterpreting traditional Islamic art in Contemporary form. His work explores spirituality, inter-faith dialogue and pluralism. Moorhouse works with classical motifs and traditional design found in mosques and reinterprets these in sculptural forms that are elegant, harmonious and elevating. The sculptures, combining balance, repetition, detail and form to create intricate works that have a strong aesthetic and transcend traditional boundaries of culture and conveying a profound essence of spirituality’. 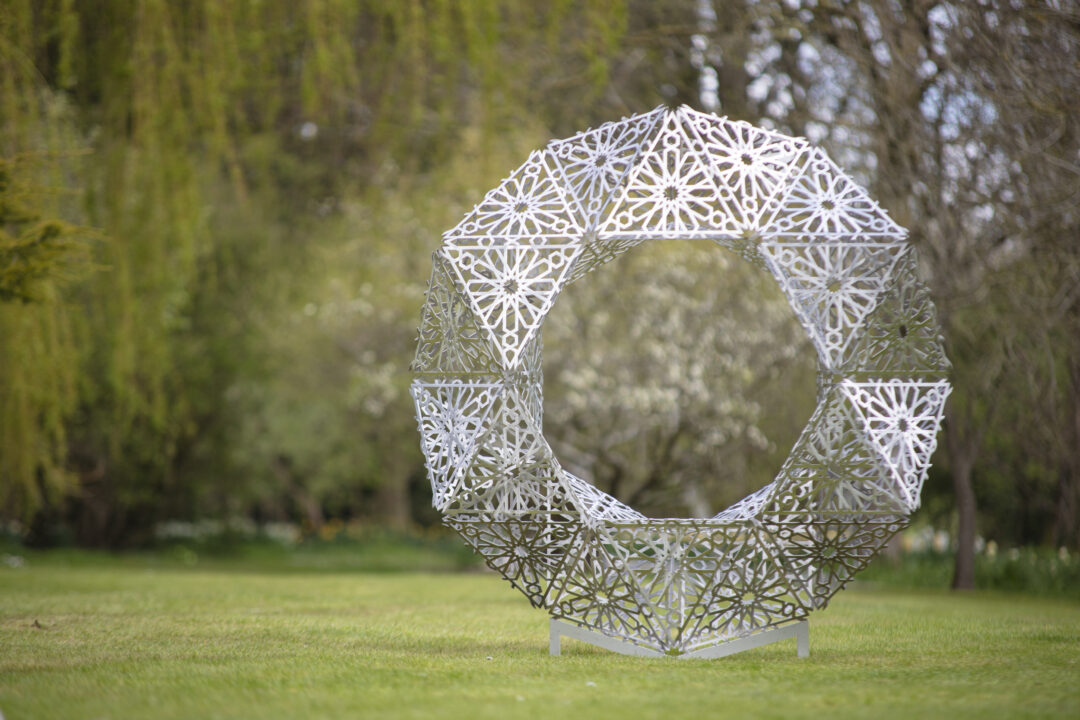 The spectacle of geometry: harmony, balance, beauty, and proportion

Pete Moorhouse’s body of work transcends traditional boundaries. His sculptures rework traditional Islamic patterns typically found within mosques across the pan-Islamic world. The traditional two dimensional geometric patterns are symmetrical, proportional, and balanced and are widely found within tiling, mosaics and engravings. Geometry as a genre is strongly rooted and boldly represented in eastern geography due to these strong Islamic origins.

Moorhouse’s sensitive reworking of these designs, respects the rich heritage of Islamic art, as he extrapolates the original designs to form innovative three dimensional form, with elements of the original motif informing the resulting sculpture. The sculptures evolve with their own defined visual language and a strong identity of their own. The surface dances with the leitmotif, as the pattern recurs like a short musical phrase, mirrored along folds in the steel. 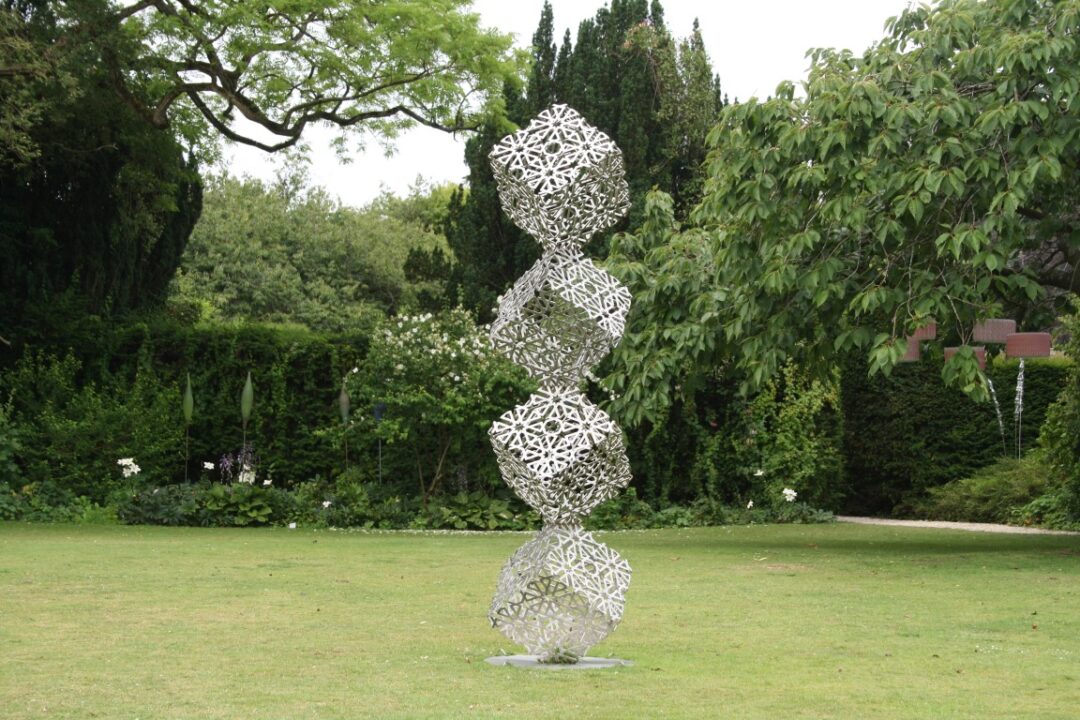 Geometric patterns are amongst the most recognisable visual expressions of Islamic art and architecture. The geometric patterns in Islamic art are based on the repetition of a single motif, which is designed in a specific way that recurring components fit together to form a perfect sequence.  Moorhouse’s work pays homage to these original designers and craftsmen that had a wealth of geometrical and mathematical knowledge in order to construct their work.

The motifs are based on a grid system, resulting in patterns that are interwoven, and link becoming infinitely repetitious, whilst retaining proportion and balance with a complexity that many consider sacred. The aniconic nature of Islamic art, invites a deeper form of expression to lie within the geometric complex patterns. It invites a contemplation of the infinite by adhering to laws of beauty, harmony and complexity.

Within the Islamic tradition geometry was considered to be of high importance, imbued with spiritual, cosmological and philosophical significance, which delve well beyond the visual aspect. Geometry was seen as a branch of mathematics, concerned with dimensional analogues. The basic building blocks are all based on key elements found within the natural world, hexagons, squares, circles, triangles and pentagons all directly relate to natural phenomena such as honey-comb, crystals, petals, planets and so forth. 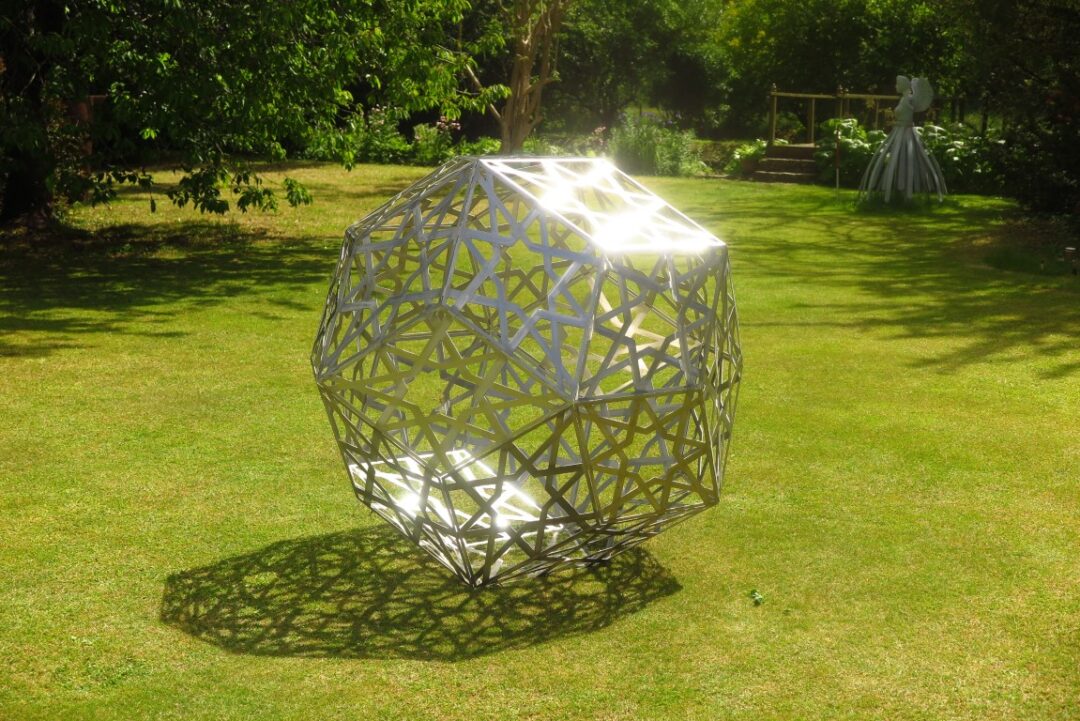 Moorhouse’s work combines the western artistic canon with that of the East. Over time Western art has embraced geometry at certain key moments such as cubism, constructivism, De Stijl, the Bauhaus and examples within optical and kinetic art as well as many artists embracing tessellation within their work. We can clearly see the influence of minimalism on Moorhouse’s sculptures. His work is restrained and rigorous with his adherence to clean lines and reduced form. It is deliberately kept minimal avoiding superfluous form and thus has a strong impact and communicates clearly.

In this way Moorhouse’s work is a fusion between East and West, the marriage of minimalism with geometric abstraction. Moorhouse can be thought of as a geometric deconstructionist, freeing and liberating the two dimensions, exploring new landscapes, as he reworks and reinvents creating bold new three dimensional form, resulting in new patterning and contexts where boundaries are pushed to challenge perceptions and reveal new meanings and concepts. The three dimensional form extends and expands the surface, with the manifestations returning us to the natural phenomena, perhaps revealing universal truths. Moorhouse’s sculptures are representation of the unlimited possibilities of the imagination with the capacity to create original form.

Moorhouse’s sculptural forms create a never ending pattern, embedding the infinite. There is no beginning and no end. As the surface becomes form, a new abstract shape emerges, a new manifestation of a spiritual inner truth.  Spatial relationships between the resulting form and the original motif pattern creating a resonance. The geometric forms are a dance balancing up proportion and symmetry, with visual representation in geometric pattern and a intuitional sense of aesthetic beauty, conveying a sense of the mystery of creation.

The facets or faces are an important leitmotif in his work. Moorhouse’s approach to geometry moves between its structural beauty and the spiritual complexity, as it embodies the forms of the universe. The sacred and the profane are merged, balanced and to create harmony. Balancing proportion and pattern within the sculpture encompasses spiritual meanings as new relational sequences are created. There is a universal appeal in the symmetries of order, and tessellation. By creating three dimensional form, new perspectives emerge and well as new spaces and voids allowing new relationships. The sculpture balance substance with essence, and lead the viewer on their own journey. The sculptures are formed with repeating parts creating a whole, but it is apparent that the part also contains the whole and the whole carries the visualisation of the part.

Geometry can be thought of as the study of spatial order through the measure and relationship of form. It is an unfolding of number into space, providing a timeless language of aesthetics. Throughout the ages it has offered infinite possibilities to artists and designers, with the mathematical principles permeating the aesthetic development of their work. In a way the abstract language liberates us from the here and now, from our ego, to a timeless dimension of harmony and eternity with the wider creation.  The sculptures celebrate the concept of unity and diversity, that all things are connected, as well as the diversity that lies within unity. Seriality or repetition is the essence representing growth without a boundary. 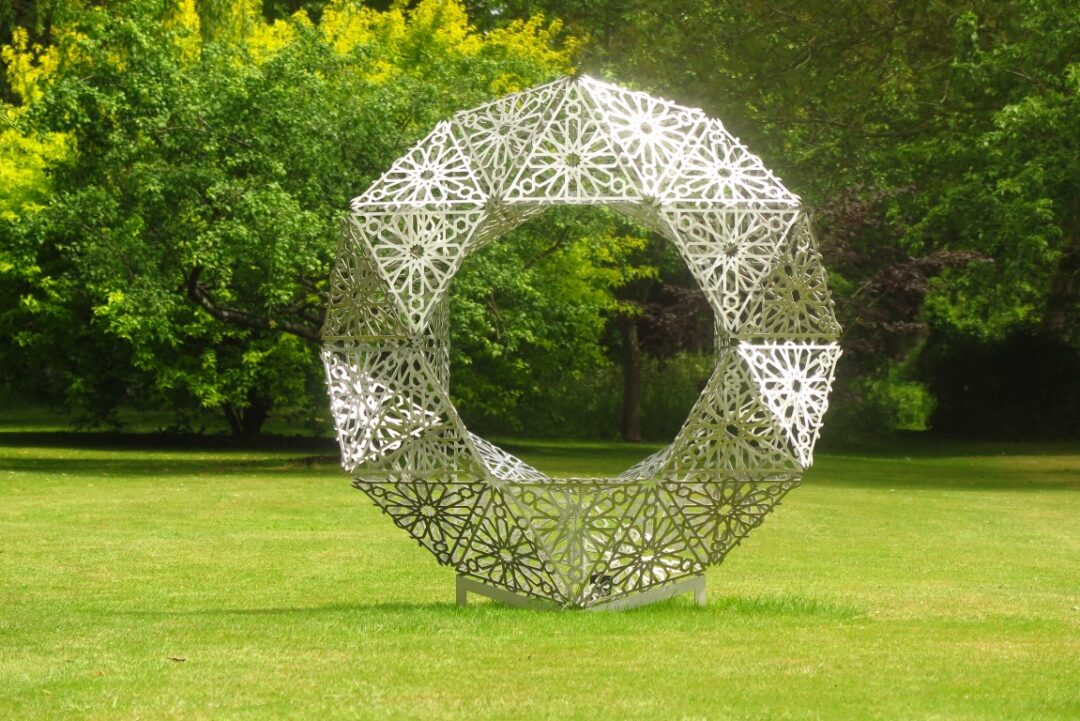 Moorhouse has work located within mosques in the UK. He is also currently working on a new Minaret for mosque in Bristol, UK. As well as creating sculptures, Moorhouse has designed many wall panels exploring a variety of geometric designs working with a wide selection of eclectic materials.

The resulting work is spiritual, offering a moment to contemplate, and elevate the soul. The spirituality of abstraction inviting meditation on the absolute. Moorhouse represents many visual variations around the same imaginary route, following a meandering creative process resulting in a labyrinth of form. The sculptures become a map of thoughts and feelings, line, shape and fragments of an ongoing interior flow and dialogue.

‘I am indebted to the astonishing historical achievements within the development of traditional Islamic arts, craftsmanship and architecture which have made a profound impact both personally and on my resulting sculpture. It is a great privilege to create art, and as with the original designers of the motifs, the rigour and discipline of the construction becomes a form of meditation.’

We are thrilled to have some of Pete’s work in Fresh Air Sculpture 2022. You can find out more here.