It’s not every day you get to slice open a rare piece of rock as if it was a lump of butter, but this is what the Cotswold Water Park Trust did in 2016.

Now one half of the stunning piece of local geological history will be on display at Fresh Air Sculpture from 16th June to 7th July 2019.

The 1m diameter rock, known in geological circles as a Septarian Nodule, and easily weighing half a ton, was cut in half by specialist stone cutters at a quarry in Tetbury to reveal a spectacular maze of calcite crystals. These are formed through the action of organic matter on the Jurassic seabed, approximately 160 million years ago.

Septarian Nodules are concretions containing angular cavities or cracks, called “septaria”. The word comes from the Latin word septum; “partition” and refers to the cracks/separations in this kind of rock. Cracks are highly variable in shape and volume, as well as the degree of shrinkage they indicate.

In the Jurassic era, this whole area of the UK was a warm shallow tropical sea, with marine reptiles and an abundance of ammonites, belemnites and other related creatures. The ancient sea bed formed the deposits of Kellaways and Oxford clays we see today which become exposed underneath the Ice Age gravels, following the extraction of sand and gravel.

The Nodule from the Cotswold Water Park is a rare example of an unusually large Septarian Nodule from the Jurassic period. There is evidence of some fossil ammonites on the surface of the rock, but once cut in half, the calcite deposits of the nodule were revealed, creating this beautiful geological sculpture.

We are thrilled that visitors to this year’s show will be able to enjoy this fascinating piece of ancient stone. 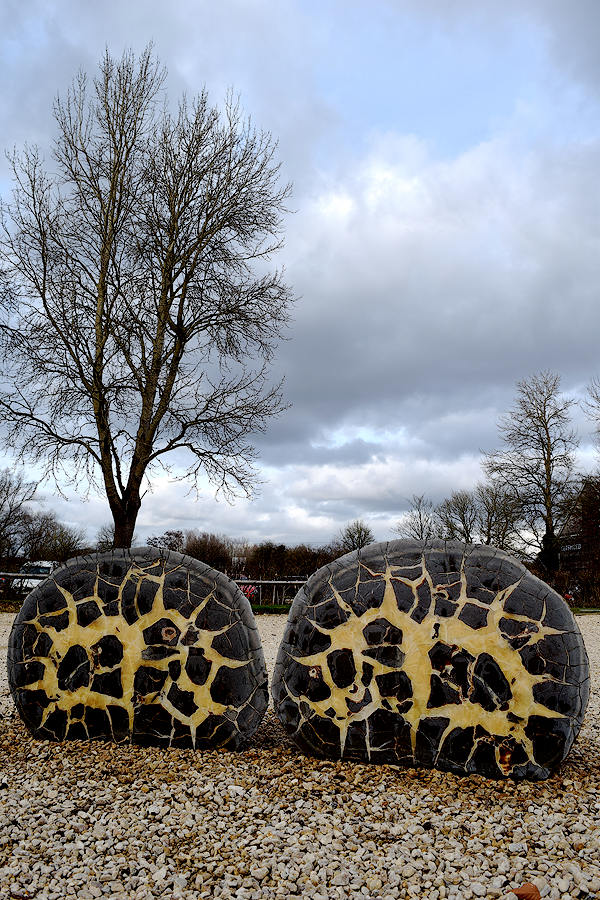