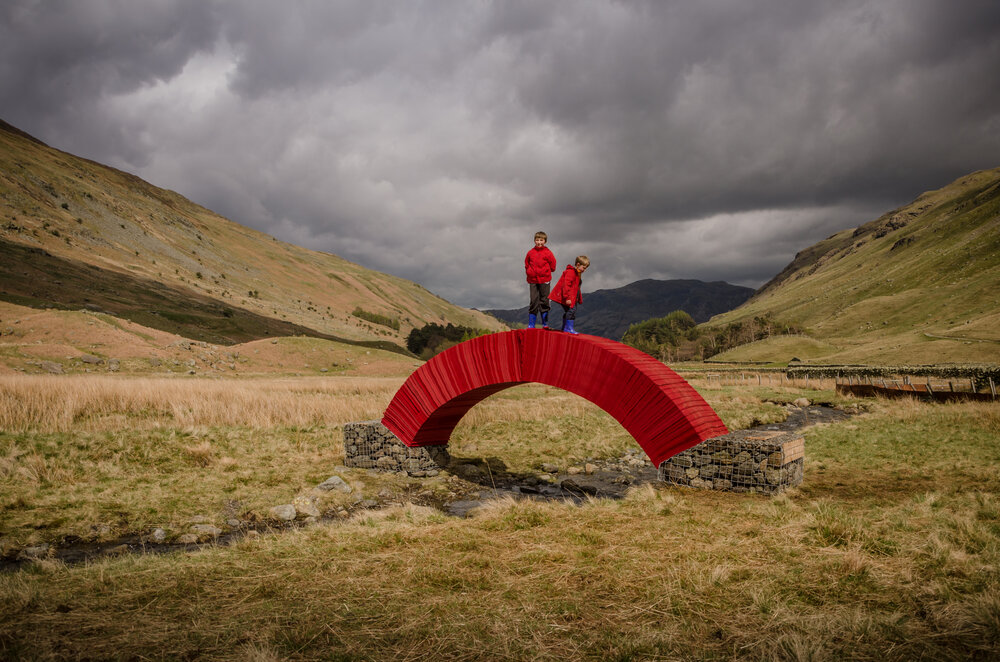 Steve Messam is an environmental artist based in County Durham. His ephemeral site-specific installations re-imagine the everyday, interrupting historical landscapes and vacant architecture to help us perceive the familiar environment in a new way.

His works seek to explore and uncover the layers of narrative within the rural environment, frequently drawing on existing uses of the land and reflecting an understanding of the geological, cultural and agricultural practices already being used to shape the landscape. His ephemeral, site-specific art installations uncover hidden stories and enable a deeper understanding of place.

Working on a scale that is typically ‘bigger than a house’, his works explore the colour and scale of place. His inflatable textile works include a suite of pieces that filled historic ruins in a Scottish castle gardens and wrapping a seating shelter in Blackpool.

For Fresh Air Sculpture 2022, Steve will be creating a site-specific inflatable.

What goes into consideration when making a site-specific like for Fresh Air Sculpture?

“I always start with an open mind. So I never have a fixed idea about what I want to do. I always go completely clueless. It’s quite nice to do that, rather than have a pre-conceived idea and force it to fit in. I’d much rather have a completely open mind, and find the things that genuinely excite me”.

How do you choose the colours and shapes for your artwork? Is it your intention that they contrast the natural environment?

“As an artist, choosing colours is a really complicated process, there is no easy answer. For me, it’s not about symbolism. It’s the same kind of complexity as: ’Why do you wear the colour shoes that you’re wearing?’ There may be an easy answer like, ‘Well I fancied wearing red shoes’, but there is likely to be complex reasoning behind that”.

People see my work as being about bright colours, I don’t see it that way, for me my work is about form. I find shape much more interesting.

Do you find that the shape dictates the colour you use?

“Yes, invariably the form is first, because of the practicalities of which forms you can use around certain architecture in the landscape. Then comes the colour, and I work through the colour as I do the mockups and visualisations, I see which one sits and feels right. Because ultimately what you end up with is an artwork and you go, ‘Yes, that’s the right artwork‘.  If it’s a different colour it feels very different.

Due to the sheer size of your pieces, can you test your inflatables?

“The real issue is that most of my pieces are bigger than my studio. In fact I could fit my entire studio inside most of the artwork, so I can’t ever test inflate them in there. Making things that are too big to see what you’re doing is a challenge in itself.

But everything that I build gets tested beforehand because they are all temporary, so when they go up there is a sense of the magic of them happening.

Because they are so public, I want that magic to just happen, I want them to effortlessly appear, that’s how it needs to look.

But in reality, it isn’t effortless, it takes weeks and months of testing to make sure it works when you install it.”

The impermanence of your installations seems to be a reoccurring theme in your artwork, that they appear, they interrupt, and then they’re gone. Why are they so temporary?

“Yeah, yeah that’s part of the story-telling, everything that I do is telling stories, about the place, about the building, the structure of the architecture; it’s about finding those narratives, telling a story, and being part of that story. It has a beginning and a middle and an end, and that’s what the temporary installations are.”

So would you say that the artwork is when the audience and environment interact with your pieces, and that interaction is where the artwork happens?

“Absolutely, the pieces are an experience, and that’s what excites me as an artist, it’s not an artwork that you simply look at. To understand the artwork, you have to be there with it. Things like scale are fascinating because they have a presence that you don’t get in any other medium, scale is a medium in itself. There is a sense of awe that you have with artworks on a certain scale because they are larger than yourself.

How do you consider environmental sustainability when making your artworks?

“They run 24 hours a day, yet consume less electricity than a light bulb, there’s no real power consumption. All of the pieces made for ‘The Architect of Ruins’ were battery-powered, and that battery was charged by solar power. Basically, those artworks were powered by the sun, there was no way we could get a generator to the locations.

I designed ‘Hush’ to be entirely recyclable, down to every last detail. There was an awful lot of fabric, 5 miles of it. So we worked with a recycling company in Preston, so we knew exactly where it was going to go. We tested the fabric to make sure it could be recycled so it wouldn’t end up anywhere near a landfill.”

How has your practice changed during the COVID restrictions?

“All the stuff that had been planned just stopped dead, but I did still want to make stuff. I was able to get on and do the project called ‘The Architect of Ruins’ exploring local landscape, installing artworks in places that people can’t even get to. So I started that project thinking ‘How can I survive and make art?’ because that’s what I want to do, to make art.

These pieces have been installed without an audience during lockdown. The audience has viewed the billboards, rather than the real work. That was an interesting thing to do. These artworks still existed, they were there, they had that sense of place, scale, and presence, it’s just that there was no one there to see it. Yet, all of that power was still there.

It’s that whole thing of ‘If a tree falls in the woods and no one is there to see it, did it make a sound?’ And it’s absolutely that, just because there is no audience, does that diminish from the artwork?